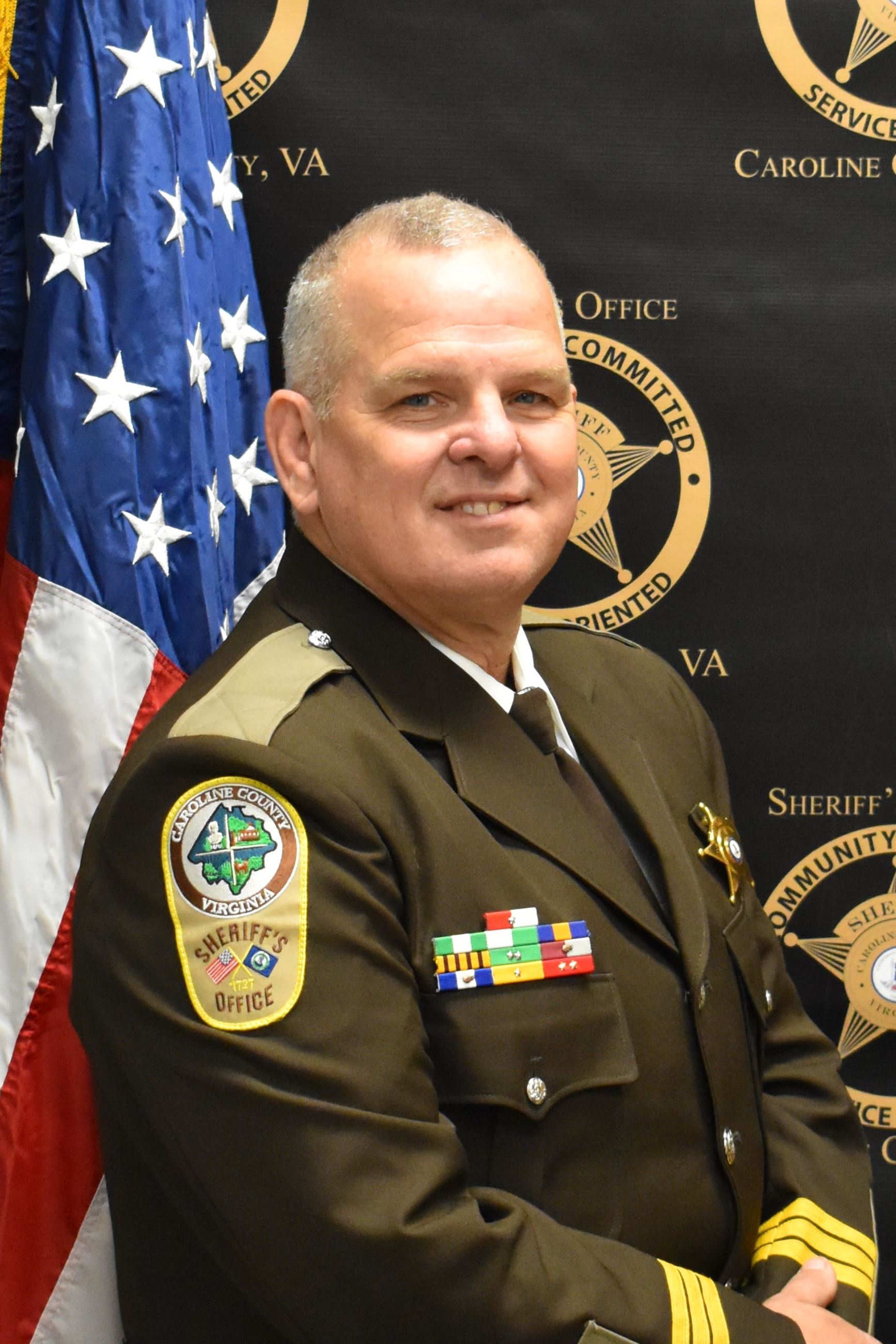 Sheriff C. Scott Moser began his career in public safety with the Caroline County Sheriff's Office in 1988 as a Deputy Sheriff assigned to the jail. He graduated from the Rappahannock Regional Criminal Justice "Jail Basic" Academy, receiving the Top Overall Achievement award later that same year.

In 1989, Moser completed the Rappahannock Regional Criminal Justice "Law Enforcement Basic" academy, once again earning the Top Overall Achievement Award. Upon completion of the Law Enforcement Basic Academy, Moser was assigned to uniform patrol, where he was responsible for enforcing all criminal and traffic laws of the Commonwealth of Virginia and ordinances of Caroline County.

In 1993, Moser was assigned to the Investigative Division, assigned as one of only two investigators. Sheriff Moser was responsible for a large majority of the criminal investigations carried out by the Caroline County Sheriff's Office.

In 1995, Moser was recognized by the United States Customs Service for his efforts and support in the investigation of the Chambers Organization, an international cocaine smuggling organization.

In 2000, Moser was promoted to the rank of Lieutenant. In that position, Moser was responsible for managing and coordinating operations and activities of the Patrol and Investigative Divisions.

In 2002, Moser was promoted to the rank of Captain. During this assignment, Moser was responsible for directing and coordinating the activities of the patrol division, investigative division, court services unit, and communications.

In 2008, Moser was promoted to the rank of Major where he was responsible for managing the Records, Courts Communications, and Investigative divisions of the department, in addition to the agency's neighborhood watch program and grant funding.

In August 2009, Moser was appointed by Sheriff A. A. Lippa, Jr. to the position of Chief Deputy of the Caroline County Sheriff's Office. As 2nd in command, Moser's responsibilities include overseeing the day-to-day operations of the department, developing budgeting, and planning operations for the effective operation of the department, coordinates activities involving federal, state, and local agencies, and oversees all divisions within the Caroline County Sheriff's Office, to include patrol, investigations, support services, courts, civil process, communications, records, and special teams.

Moser has accomplished many achievements throughout his law enforcement career. From 1995 to present, Moser has been responsible for obtaining and managing over $1,000,000 in federal and state grants. In February 2001, Moser was recognized as "Employee of the Month" for the County of Caroline. This achievement is awarded to a county employee that demonstrates outstanding work performance. Major Moser attended Virginia Tech from 1982 through 1986. In 2006, Moser completed the Public Safety Institute, a Master's course offered through the Virginia Commonwealth University. He holds an Associate’s Degree in Criminal Justice from Liberty University and has completed his Bachelors of Science in Interdisciplinary Studies from Liberty University in July of 2022.

Sheriff Moser resides in Caroline with his wife and is very activity in the community. He was even named "Top Volunteer" by Caroline Magazine. He is the President of the Caroline Humane Society and Vice President of the Sparta Ruritan Club and member of the Bowling Green Ruritan Club. He has participated in the Torch Run since 2004. He has helped at events such as Polar Plunge and Cops for Kids. Polar Plunge raises money for individuals without heat, and Cops for Kids raises money for children to purchase Christmas presents. 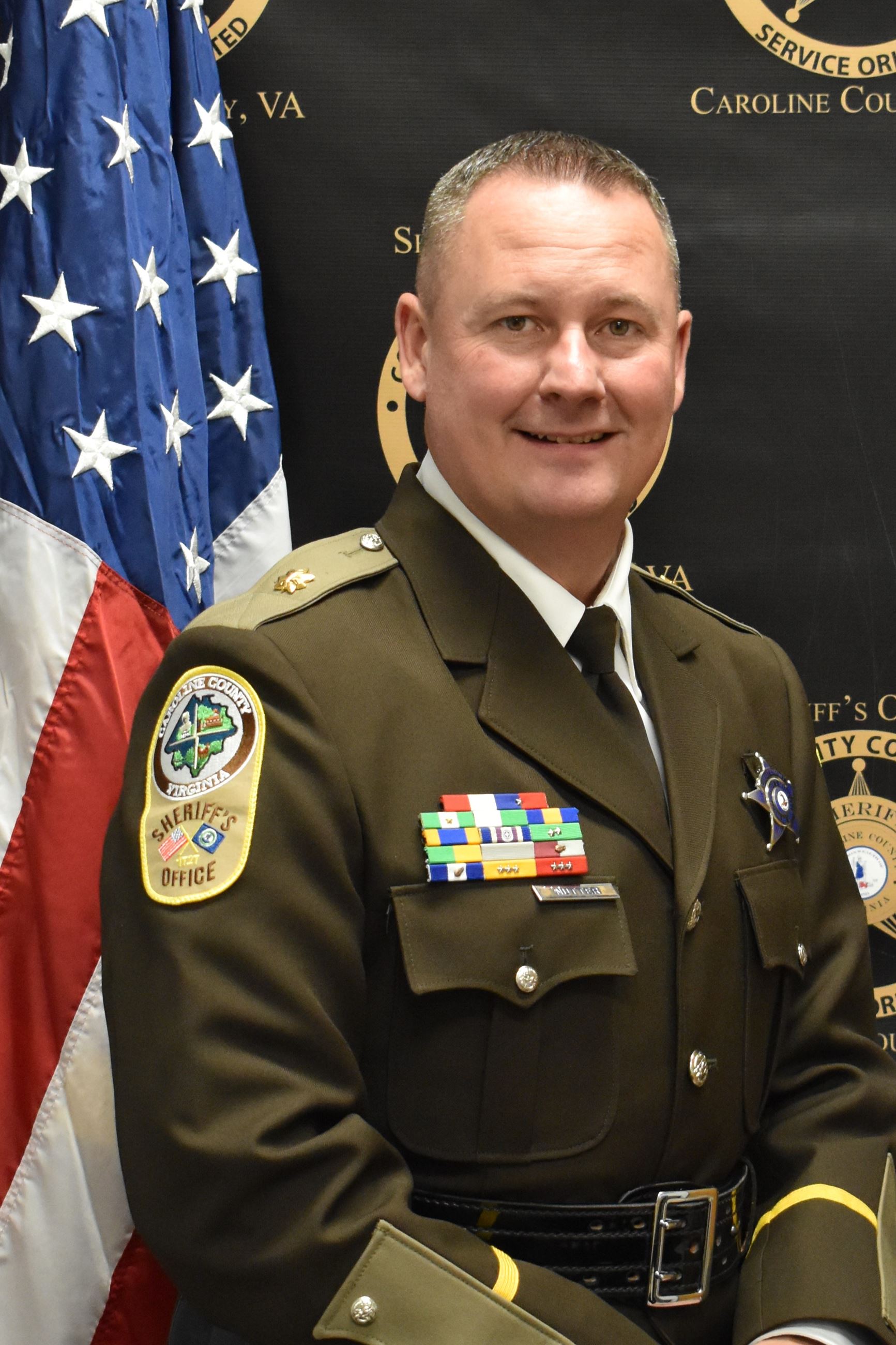 Major Travis Nutter began his career in law enforcement with the Bowling Green Police Department in 2000. In 2001, He graduated from the Rappahannock Regional Criminal Justice Academy, receiving the Top Skills Achievement award. In 2002, he began his career with the Caroline County Sheriff’s Office as a Deputy Sheriff.

In 2004, Nutter was assigned to the narcotics investigation division.  During his time in the narcotics division, he was responsible for the largest undercover narcotics operation ever conducted in Caroline County.   His efforts in drug enforcement resulted in hundreds of convictions in the United States Court and many local courts.   He became dually sworn with Drug Enforcement Administration and conducted drug investigations that resulted in arrests in many parts of the United States.  Nutter was recognized by the United States District Court, and many local courts as an expert witness in the field of illegal drug distribution.   Nutter then obtained an instruction certification and began teaching drug enforcement and related laws for many law enforcement agencies.  He received many awards related to his work in drug enforcement, including the United States Attorney’s Office Public Safety Award, and Deputy of the Year.

In 2009, Nutter was promoted to the rank of Sergeant and was responsible for supervising the criminal investigations division and the narcotics division.  During this time, Nutter managed all major cases assigned to the investigative divisions and was instrumental in maintaining a high crime solving rate for major cases occurring in Caroline County.  In 2013, Nutter received the Law Enforcement Officer of the Year award from the Fredericksburg Fraternal Order of Police.

In 2014, Nutter was promoted to the rank of Lieutenant.  In that position, Nutter was responsible for managing and coordinating operations and activities of the investigative divisions and school resource officers.  In 2015, Nutter was awarded the Police Medal for an act involving grave personal danger in the intelligent performance of duty, while arresting a murder suspect.  In 2017, Nutter graduated from the Northwestern University, Center for Public Safety, School of Police Staff and Command.

Nutter has accomplished many achievements and received many awards throughout his law enforcement career, however, his greatest accomplishment has been building positive relationships with the citizens of Caroline County.  Nutter is a member of the Ladysmith Ruritan Club, has been a Caroline Little League baseball coach since 2015, is a member of Wright’s Chapel United Methodist Church and is regularly involved with Caroline County Public School events. 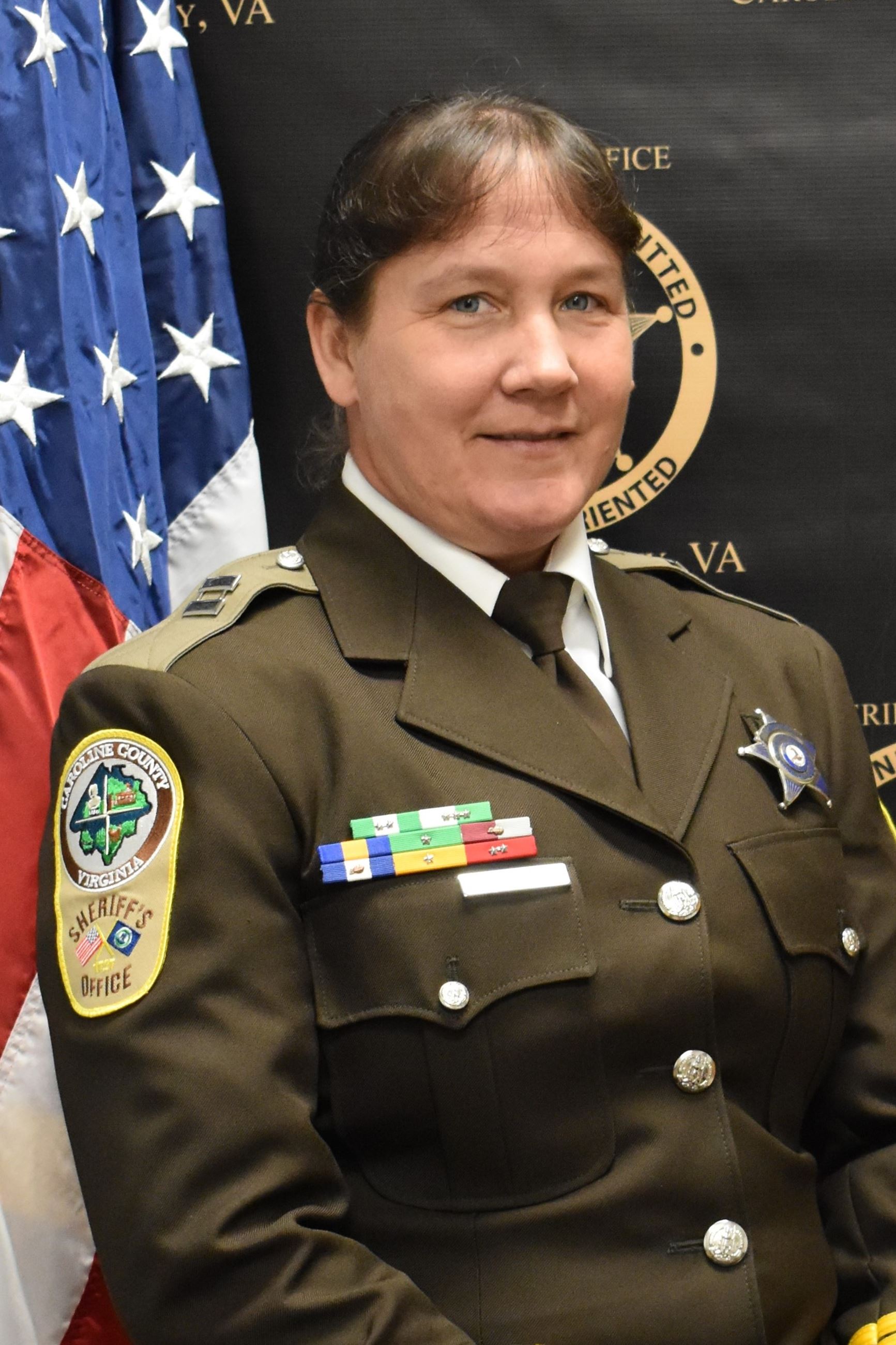 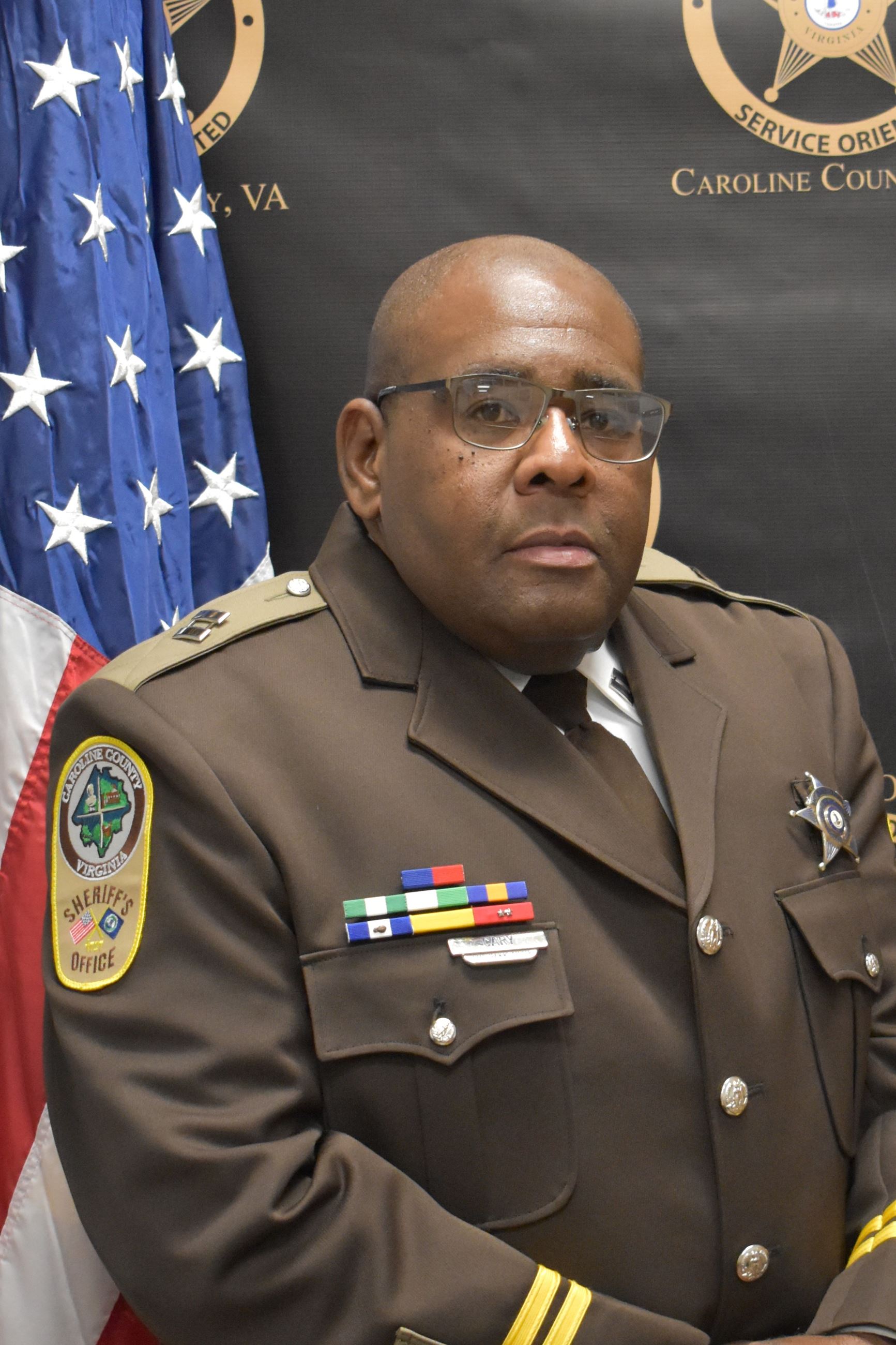